You are here: Home / Mining

ALGAEFREE mod. ALPHA 4-ways
cleaning the pit for the mining industry
ULTRASOUND SYSTEM FROM ALGAEFREE IS REVOLUTION FOR WATER TREATMENT IN MINING INDUSTRY 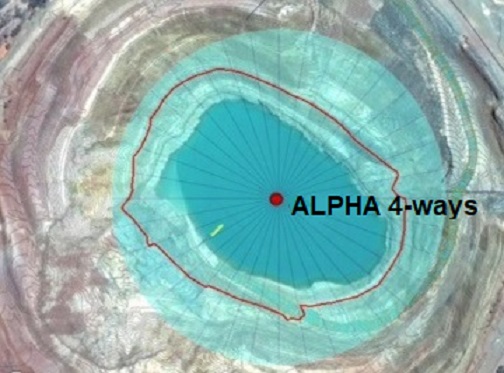 Prevention of Bio fouling and bacteria 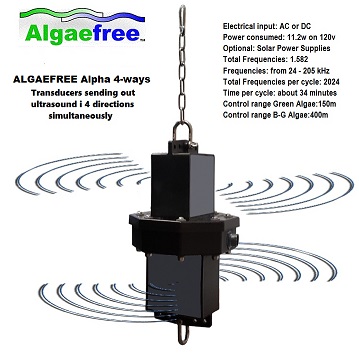 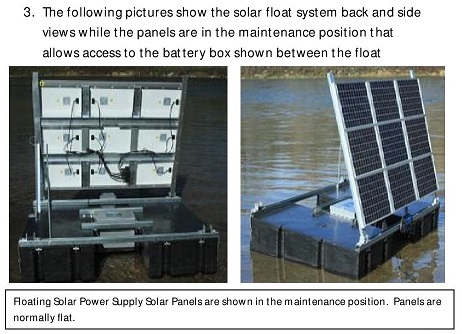 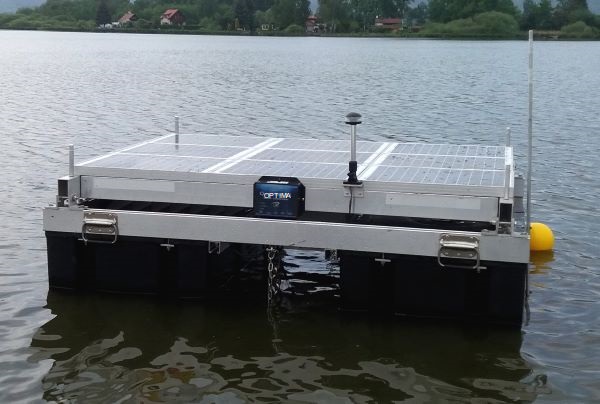 It also includes:
1) a heavy chain through and under the middle of the pontoons that is used to attach to an anchor (note anchor and mooring line is not included),
2) reflectors on the assembly for better night time visibility,
3) connecting cables from the solar panels plus a junction box where the individual panel inputs are combined to a single cable outlet to the charge controller,
4) an attachment chain to hang the ALPHA 4-ways to the frame with D-shackles, carabiner, zip ties, etc.
5) easy lift struts to add spring lift for the panels making it easy to open for on the water inspection,
6) handles on the corners to make it easy for four people to manually lift the entire assembly into
the water. 7) switches to turn off the batteries and solar charge controller.

Emit sound waves to create an environment of critical structural resonance. The resonance causes a very unique environment in the immediate vicinity as it can critically vibrate internal parts of green algae and diatoms causing them to internally tear apart preventing proper fluid flow.  In blue-green algae, this effect causes gas vesicle tubes to break causing loss of buoyancy and they sink out of light. The resonance also causes bacteria to avoid colonization because it is similar to water turbulence, a condition they avoid in nature. This helps to keep the walls clean. The prevention of the initial bacterial growth eliminates the attachment of algae, barnacles, and other crustaceans.

If the mines has problem with chlorella, bacteria, biofilm, green, and  blue-green algae, ALPHA 4-ways is the only green solution there is.

M IS THE CAUSE OF THE PROBLEM WITH ALL UNWANTED FOULING 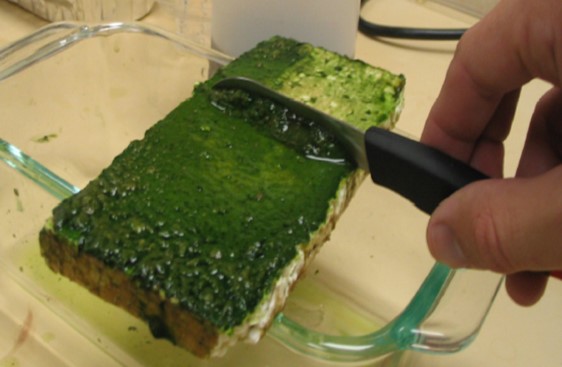 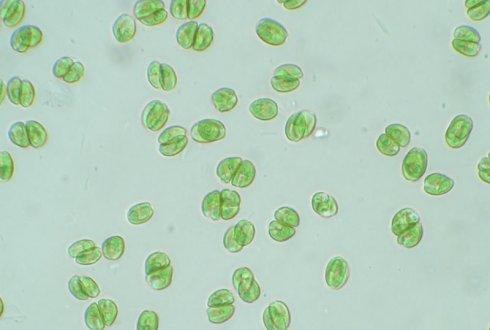 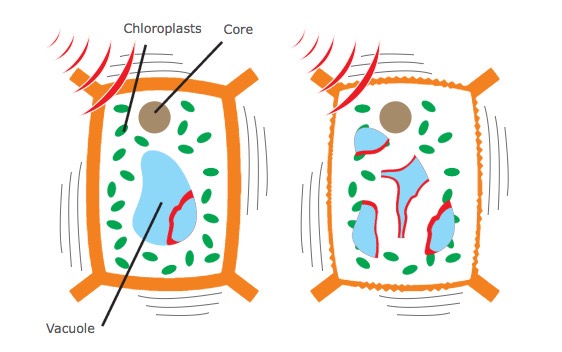 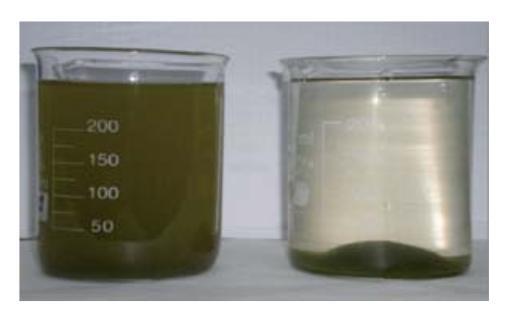 ALPHA system is very effective with Powerfuel Transducer and extact footprint for the different tubes at the prevention of algae and bacteria formations and drastically reducing the chemical requirements, reducing maintenance costs and improving efficiency.

Like Chillers and cooling towers represent a substantial capital investment and are often the largest single contributor to operating and energy costs in commercial facilities. It is therefore paramount to maintain the highest possible efficiency from any chiller system and ancillary / supply pipe network or condenser / cooling tower. The use of Ultrasonic Bio Fouling and Descaling protection helps to maintain chiller and pipe networks for the highest efficiency possible from any given system. By maintaining, descaling and treating the water for algae in both the chiller and the feed pipes the ALPHA Fouling Prevention system drastically improves cooling inefficiencies and saves money. 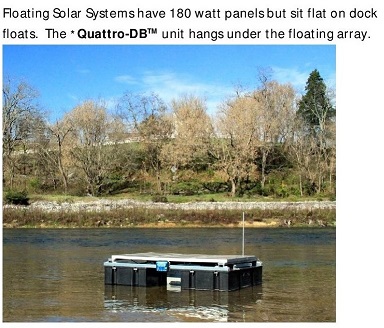 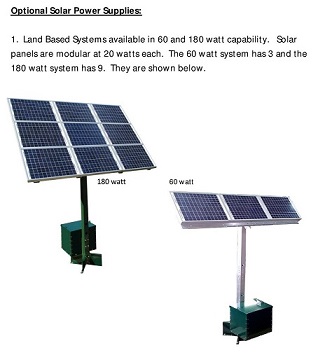 Revolution for the land based industry because his unique ultrasound system avoid bio-film, barnacles and mussels in water reservoir, pipes and cooling system. ALPHA has been in Ultrasonic Technology industry for over 9 years and was the first to develop, what is now, the industry leader in Ultrasound against Marine and algae growth to the maritime and land-based industry. With the development through the years, we are still leading the algae-free industry, when it comes to this technology. The advanced rate algorithms, for the commercial and industrial sector, have had great results.  The ALPHA series is the most advanced and powerful solution developed. ALPHA Ultrasound systems also the best solution for Bio-fouling problems on the market.

Mussels live mainly in algae, that is in sea water and this where the problems begin with the mussels clog systems. This in turn leads to the higher temperatures in the cooling of water. Businesses that use sea water for cooling, have two solutions, chemicals and cleaning. It turns out that the mussels have become so clever that when the chemicals get into the water system they close them out and survive.

The mussels main consumption are microscopic algae, phytoplankton, but they will also be able to make use of other organic particles such as bacteria and detritus. Mussels live by filtering out and eating small, organic particles from the sea. The main feed for the shells is freely floating, microscopic algae, called the plant plankton or algae-plankton. The presence of toxic algal plankton shells will accumulate from these toxins. The amount of toxic algae present, says something about the risk that shells can accumulate algae-toxins, to levels that make them unfit for consumption.

BIO-FILM IN THE FISH FARMING INDUSTRY

Water is an excellent environment for ‘biofilm production’ (“fouling”) and it will form biofilms on all fixed surfaces in water i.e. fish-breeding installations. These biofilms will largely consist of environmental organisms (but pathogenic bacteria, fungi and viruses can also establish themselves and survive in these biofilms) and contribute to repetitive disease outbreaks. Today we have very little knowledge about the possible meaning of this.

Biofilm as part of disease on fish. Microorganisms can form biofilm on mucous membranes, e.g. gills in fish.  Both immune apparatus and antibiotics have problems removing germs in biofilm. Diseases are often chronic, leading to tissue damage and is very difficult to treat. The formation of biofilm on/in the fish, could be a possible contribution to the development of the disease, thus preventing the wound healing. We have today, limited methods to manage and prevent sustainable disease outbreaks, where biofilm plays a role.

Expertise-needs on fish health. There is very little knowledge of biofilm properties and infection in fish, with substances, despite the fact that most of the water is covered in biofilm. There is, therefore, a great need for knowledge about the effect of ‘H2O’ ultrasound mod. The ALPHA and the importance of biofilm in the development and spread of disease in farmed fish.

It’s not just in medicine and the food industry that microbes offer problems. Boat and ship hulls come in contact with many micro-organisms when these are being launched. These will, after a short time, cover the hull. First comes the bacteria that creates a biofilm that barnacles and shells like to attach themselves to. This means that the boat/ship will experience more friction between the hull and the water, which in turn increases fuel consumption.

Scientifically proven technology. Ultrasonic control of algae is a documented method. Ultrasonic processing is used in many industries and has long been known to destroy bacteria and algae on a molecular level. This has been tested by many universities and research institutes around the world (including thoroughly tested and proven by the Australian Navy). H2O technology brings this ultrasound solution for a reliable, secure, power conscious and very effective system with many years of experience that is required to use the solution effectively for water treatment

Effective treatment to control algae and reduce the chance for legionella formation.

Use of ultrasound through water can eliminate up to 95% of the existing bacteria and algae and manage growth, thus reducing or eliminating the need of chemical dosing. ALPHA systems prevent the formation of new algae in both sessile and planktonic form.

Drinking water pipes and equipment are also especially exposed to biofilms. For example, biofilm in water can appear in an ordinary air conditioning plant and a chicken house, can become a reservoir for salmonella.

Legionella is a serious bacterial growth that is formed in the course of the water masses, namely when there is a higher CFU/mL level than the industry standard.
Legionella can cause severe health problems in humans when spread through air conditioning and through the use of Ultrasonic technology from H2O the risk of legionella can be greatly reduced.